Today I arrived and left Foz do Iguaçu. It’s an interesting place. I got the bus I think on Monday afternoon: Rio to São Paulo, 6 hours, then an overnight wait at a nice hostel in SP for the 14:00 bus to Iguaçu. I managed to visit a nice little photo gallery in SP before I left which had an exhibition about the Amazon. A bit of relevant information is that as I was about to board the bus from SP to Iguaçu, the driver almost didn’t let me on because I didn’t have my passport. I was ready to head back to Rio but when I asked if I could go he seemed to admit defeat and let me on.

After the 15 or so hour bus journey I arrived at 7am in a very foggy, overcast Foz do Iguaçu. The place was a bit dismal. It felt like a crappy part of Croydon. Maybe because the weather was so filthy but still. Home of one of the 7 wonders of the world you expect a bit more of a greeting. The pyramids were like this though so I’m beginning to learn to lower my standards.

So I left the bus station and decided to try and walk to the falls. A guy at the hostel in São Paulo showed me a map and it seemed pretty close. After about half an hour of walking I decided to ask for directions.

I chose the most reliable person; someone selling tea towels at the traffic lights, she knows her way around. Turned out she was a bit crazy and minus most of her teeth but sporting a lovely red fluffy bonnet, she pointed me in the direction I thought it was and said a load of stuff i didn’t understand so I set off down road number two.

Later on I passed a couple of hostels which gave me a bit more confidence that I was close. And carried on walking. I passed a homeless man and entered an estate that could only be compared to a nazi POW camp. The thick mist made it even more war-like but I carried on walking none the less. I figured all the mist was from the waterfall… I was wrong. 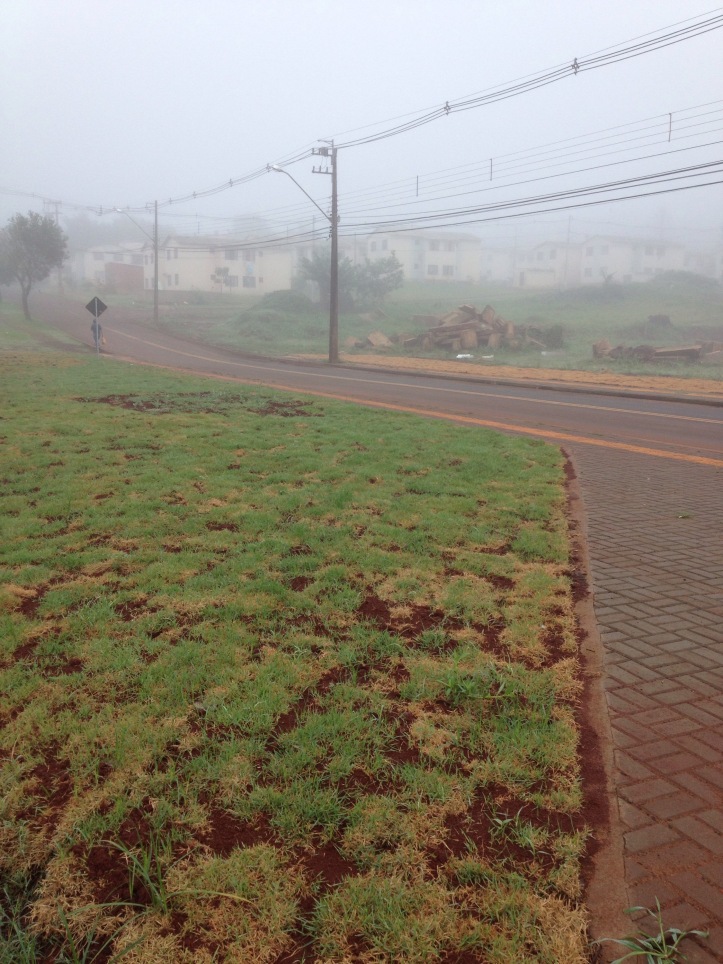 After about two minutes I turned round and headed back to one of the hostels I had seen.

I went in and asked in Portuguese where the waterfall was. He quickly swapped the conversation to English as people love to do – THANKS FOR LETTIG ME PRACTICE MY PORTUGUESE – and continued to explain that it was about 20km walk from here and I was stupid for thinking I could do it (I just hadn’t checked a map, I was following the massive signs for the waterfall which turned out to be wrong…probably).

So he pointed me to the bus stop and I got on the direct bus about 20 minutes later.

I was soon at the entrance to the falls (Brazil side, apparently good, but not as good as Argentina) and it was like arriving at a theme park. I bought my ticket as boarded the bus (full of laughing tourists, I don’t know why they kept laughing) through the park.

We arrived at the drop off point and I ran ahead of the bus group to make sure I wasn’t caught up with a crowd. I felt I would want to enjoy the fall in peace.

The actual path along the falls was short but nice, it wasn’t overcrowded (I arrived at about 9:30am I think) so I felt I could really enjoy the falls.

The only problem was that I had been told by everyone that this place was the dogs pyjamas, and I guess I expected too much. I expected to have my breath taken away by these falls and it really didn’t. They were loud, and pretty big, and lots of them, but they didn’t tower above me like I expected…I’m not sure what I expected but it wasn’t incredible. 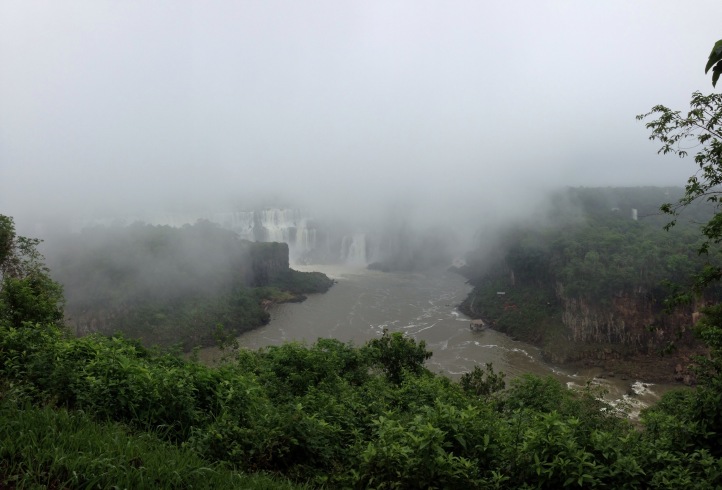 I stopped and watched and thought about water at each vantage point and it was nice. I watched birds literally flying straight through the falls to the rocks behind where I guess they nested which was quite awesome. And at the last vantage point you could stand on a platform right above a fall and look straight down in to it which was quite cool.

Then I left, at about 11am. I was on the first bus out. It was good, but I feel like the biggest buzz of the visit is that I can say I have seen another wonder if the world, but actually a hike that I went on last week with a friend was way more fun. There was a point where I thought we wouldn’t make it back down because it was a rock climbing place where people use ropes and we had nothing, and it was raining, and it was scary, and an accomplishment.

Maybe I will appreciative Iguaçu later in life, maybe it was because it was cloudy and I couldn’t see the full extent of the river leading to the falls. Anyway on the bus back they nearly didn’t let me leave. I didn’t bring my passport and they made more of an issue of that here. I had to wait for the bus company boss to arrive. He was an angry old ass but after seeing my ticket here, with his company, that I bought without a passport, he reluctantly let me on. It was very lucky I had kept my ticket here as I had thrown away all my others, as I doubt I could have got back without it as they would have not seen me as their problem. Because I got here without a passport on their bus, I was their problem. Anyway after another driver and ticket checker, they let me on, and I’m on my way back to SP.